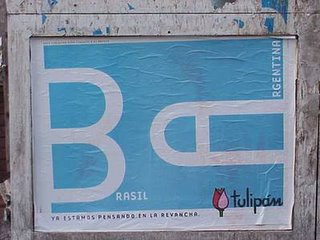 Before the football match between Argentina and Brazil, an Argentinean condom company came up with this ad to show the Brazilians what they were going to do to them. 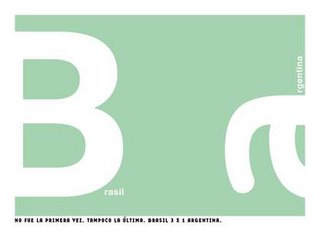 Brazil won the match and their Football organization replied to the ad.
Posted by Arvind at 5:45 AM

hahahahaa
terrific..
i have seen the earlier ad..
but not the after match ad..
hahhaa

lol, this is really good. I thought the first one was an excellent ad but the reply is even better.
Linked from IndianPad

Thumbs up for sequel ad but the entire ad borders obscenity.

Thats great thinkin' by the Brazilians...

Visiting after a long time... Congrats on being nominated for Adrag. Have voted honestly for ya! ;)

hilarious!! Took a couple of minutes to actually you know...look into the pic but...couldn't stop laughing!
-hobbes

Ok, Youre laughing now but i cant take off the pain from my back

Received this from an Italian friend and wrote this to him:

"LOL. I had seen this. But the history the blog tells is not quite right.
Actually, the Argentinians published the first ad after a loss to Brazil. That's why it says: "Ya estamos planeando la revancha" (we are already planning revenge)...

If you want to see the real big "B" from the add, check out this site:

The Hellbets is online, supported by browser, totally free bet game. In the game, participate players from 145 different countries worldwide, and every country has own pyramid of leagues. The catch is to foresee the results of football matches, witch will be played next week. Players choose the matches for bet. The matches are from world well-known football leagues. You can login and bet before those matches start, and bet only on chosen matches.

The rules of the game:

For one season will be played 14 round, and each team will play two games with everybody from same league, one like host and one like guest. On the end of the season will be promotion of teams who goes from down to up leages.

Mail and conference. Each of leages leagues have own forum and post for exchange personal messages.

Each registration will be verify by administration. By this we want to avoid automatic enormous registration and we want to make sure that players registration is from country where he want to play, because that is stringently. After administration verify player, he will get own place in league on the end of the pyramid leagues, or in the case that some of existing players exclude, new player will be put on his place, and he will continue game.