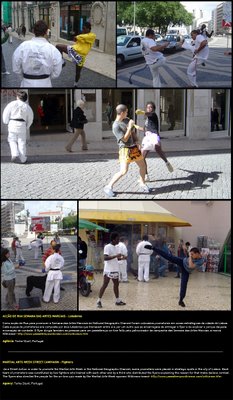 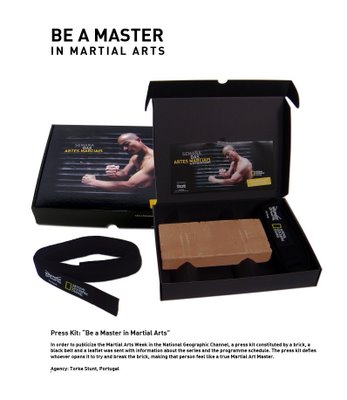 In order to promote the Martial Arts Week by the National Geographic Channel (NGC) - a series of documentaries about the surprising Martial Arts – a press kit constituted by a brick, a black belt and a leaflet was sent to the press and media buyers with information about the series and the programme schedule. The press kit defies whoever opens it to try and break the brick, making that person feel like a true Martial Art Master.For the final consumer several Street Campaigns were made:
1- Promoters were placed n strategic spots in the city of Lisbon. Each team of promoters was constituted by two fighters who trained with each other and by a third who distributed the flyers explaining the reason for that make-believe combat.The flyers also directed the people for the on-line quiz made by the Martial Arts Week sponsor Wilkinson brand.
2-About 150 black belts and flyers were placed in different supports throughout the city of Lisbon.


Thanks Hugo Tornelo for sending me this.
Posted by Arvind at 4:44 AM