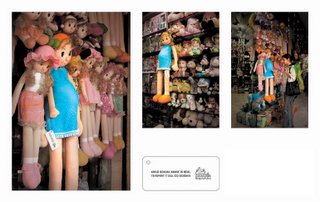 This is one ofthe stunning innovative media I have ever seen. hats off to whoever done it. The They actally placed a pregnant doll in between other dolls. A tag attached to it says child sexual abuse is real. To report it call..."
Posted by Arvind at 9:33 AM

that really hurts, but thatz the truth...

btw, whom they would have targetted placing it among dolls ?!

Anyone...who can dial a phone number...but basically it was plased on a store...so the primary TA would be kids...

TA would be parents...
Children who are sexually abused don't know what is happening to them, why are people behaving like that when they are sexually abused. They do not even know how one gets pregnant.
Also, child abuse is not just intercourse, as this AD seems to suggest.
I found the AD to be a bit cynical, my personal viewpoint though.

Though this ad may be a little cynical as arun put it, it's a gud effort