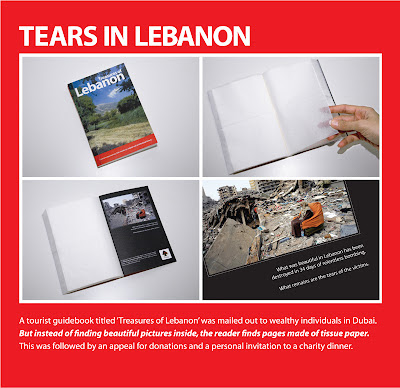 Trillion for Lebanon supports the rebuilding efforts in Lebanon. Theywanted a direct mailer inviting wealthy individuals in Dubai to a fundraising dinner. Avoiding pictures of injured children, a touristguidebook titled ‘Treasures of Lebanon’ was sent. But instead ofbeautiful pictures inside, the reader finds pages made of tissue paper.The appeal for donations was on the inside back cover. 300 copies were mailed and the dinner was a success. Amount raised was$224,600, giving an ROI of 1020%.